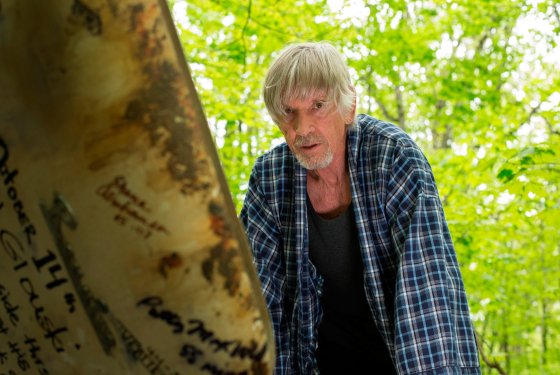 The Leftovers is being left behind.

Unlike the Sudden Departure, the abandonment of The Leftovers has been slower, built up over two or three weeks of tweets and articles noting the unrelenting grief of the show, citing the despair and the Sunday night dose of bleakness as too much. It is not unfair criticism, and it seems the question of will this episode be worth it? is much sharper for this series than many others. Answering that question is half the experience of the show, and makes me think The Leftovers may be the first show in the last decade that actually benefits from the real-time seven-day buffer of watching without binging.

If last week’s episode was a set piece, this week’s “Solace for Tired Feet” was a recognizable plot mover, complete with more questions raised than answers given. The episode brought the return of Mapleton’s wild dogs and Kevin Sr., who escapes from his psychiatric ward and brings some now familiar problems crashing into the Chief’s kitchen, though the Chief, suffering from lost time and possible hallucinations, can’t quite name them.

The show opens with Jill in the woods with her friends, where they surround an abandoned fridge. The words scrawled across the door, which they read aloud as an incantation, tell the story of October 14th, when a bullied boy disappeared while locked inside the fridge in a “childish prank.” Jill, who has thus far displayed a reckless willingness to get into trouble, steps into the fridge, saying that she will beat the record. It is a breathless beginning that is briefly punctuated by a cut away scene to the Chief and Nora. It is their fifth date, and they enjoy a genuinely funny and flirtatiously awkward moment as Nora invites him back to her place. But when Jill’s time is up, the handle to the fridge snaps off and whatever cool reserve Jill or this viewer is able to channel quickly evaporates as she pounds on the door and her friends panic.

Enter the hero. He tips the fridge over and opens the door (how?) and as he takes shape against the blinding sunlight it’s unclear if the scene is reality or imagination. “Don’t tell your dad I was here,” he says and lopes away, bathrobe falling. Jill’s friends stare.

The majority of the episode follows the Chief as he gets word of his father’s escape and goes after him. In a fevered dream he imagines he sees Tom and a mailbox against the backdrop of snarling dogs and members of the Guilty Remnant dead in the back of Dean’s truck. (Dean, in case you’ve forgotten, is everyone’s favorite local dog hunter.) This dream might not mean much beyond evidence that something seems to be wrong with the Chief, except we also return to Tom.

Now with an eight month pregnant and sick Christine and getting desperate, Tom finally gets a call from Holy Wayne. Holy Wayne is lying on a cot in a dark, windowless room and seems neither Holy, nor wholly in control of his mind. But he tells Tom to take half of his remaining money and tape it to the underside of a mailbox, which turns out to be the same one from the Chief’s dream. Tom waits in his car until the money is retrieved and then follows the errand boy to a hotel, where his frustration and anger is channeled into two satisfying moments of busting though closed doors. There is no Wayne, but there is another pregnant Asian woman and an alternative Tom who is has been tasked with her care. Finally Tom’s fears are confirmed and he is left with nothing to do but laugh wildly. His cult devotion has finally cracked.

The same cannot be said for Laurie, who remains my household’s least favorite character. She is a woman who lost no one in the Sudden Departure, and yet has committed so fully to the Guilty Remnant that she writes “So?” in big scrawling letters across Nora’s file when now-officially-silent Meg reveals that the Chief and Nora are screwing.

Finally, the Chief tracks down his father through preacher Matt, and they meet in a diner that had been a childhood favorite of the Chief’s. Kevin Sr. is still confronting voices, and it is supposedly at their bidding that he pushes a National Geographic Magazine across the table, which the Chief must accept. He tells the Chief that he needs to wake up, and that he has a purpose. When the Chief refuses to accept or listen, the situation escalates and Kevin Sr. is hauled to prison.

Was it worth it this week? Certainly The Leftovers is offering a glimpse of what it could be. Most viewers readily accepted that the Sudden Departure would never be explained, but as the show introduces more mysteries (is the Chief having visions? Could Holy Wayne really have magical hugs? What is with the dogs?), it opens opportunities for answers. Isn’t that a way to deal with grief and despair? Give us a puzzle and a bit of hope and I think we find a way to carry the rest.

Margaret LaFleur lives, writes and watches TV in Minneapolis, MN. More of her writing and miscellaneous internet interests can be found on Twitter or at margaretlafleur.com.

One thought on “The Leftovers recap: Season 1, Episode 7”