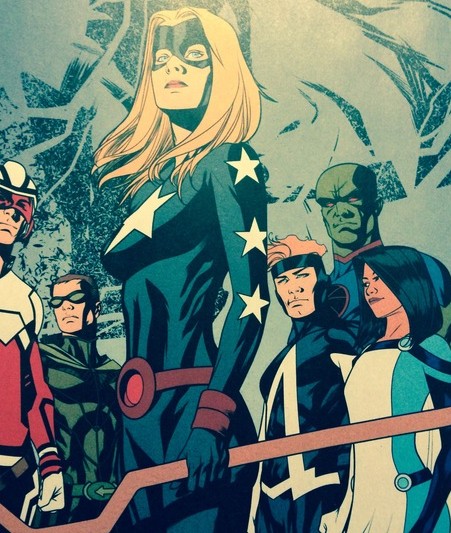 This week, we got our first glimpse of DC Comics’ newest character: a teenage girl from James Bay, Canada—and a member of the Cree, one of the largest First Nations in North America.

Created by writer Jeff Lemire, this character is inspired by real-life teenager Shannen Koostachin, a youth activist who died tragically in 2010.

The Daily Globe and Mailsummed Koostachin up simply: “She had moxie.” After learning about her life—how she inspired kids and changed her community—the sentiment seems an understatement.

A Cree member from the Attawapiskat First Nation in the remote James Bay in Ontario, Koostachin was an activist for native education in Canada.

At 13, she organized a campaign to get the temporary school in her community replaced with a permanent and safe school that offered high-quality and culturally relevant education for First Nations students.

Her persistent engagement led to rallies and online campaigns, and drew media attention from around Canada. When the federal government claimed they didn’t have the funds to build a new school, her class canceled their annual field trip to send Shannen to meet with Minister of Indian Affairs.

It would be another year before the government promised to build a new school for the Attawapiskat children. That same year Koostachin was nominated for the International Children’s Peace Prize.

Then, in 2010, when she was 15, Koostachin was killed in a car accident. She never saw the school that was built as a result of her passion and advocacy.

Her activism on behalf of education for First Nations kids continues in the youth movement that bears her name, Shannen’s Dream. The movement, according to its website, seeks to educate and engage “Aboriginal and non-Aboriginal peoples to better understand the education inequities” that exist in Canadian education system for First Nation children.

Inspiring a Justice League comic book character may seem small tribute to a young life cut too short, especially to non-comic book readers. But such a legacy contains the potential for powerful—and global—effects.

Superhero comics have the capacity to reach—and inspire—audiences around the world: audiences unfamiliar with activism in places like the shores of Hudson Bay; audiences like myself.

While Native American and First Nation characters are not absent from comic book history, the need for new heroes and an increasingly diverse representation of cultures in our popular mediar emains paramount. And with this new Cree teenager superhero, not only is a there a new character to admire, but a real life hero for youth and adults to follow.

I’m happy to have learned of the life of Shannen Koostachin, and encouraged by what she accomplished. Stories like Koostachin’s are important not only for the local successes achieved—a new school and facilities in this case—but also as a reminder of the dedicated, inspirational activism taking place all over the globe.

I’m not the only person who will be inspired by Koostachin’s legacy as a result of her presence in the DC Universe. To me, that’s testament to the real ways popular culture exposes audiences to human experiences we might have no access to otherwise. Comics have always done this.

Since the creation of the medium, readers have been engaging with comic books in search of hope and inspiration that transfers to the real world. DC Comics has been doing this for decades, from Superman’s stand against corruption in the 1930s to Wonder Woman’s feminist adoption in the 1970s.

Koostachin’s story is capable of engaging young people in that same endeavor. If her story has greater reach in Canada and across the world because the Justice League carries even a small part of Koostachin’s legacy, then Jeff Lemire’s new character will play an important role for the DC Universe—and that of its fans.